Home|News|Sony’s aibo robotic dog can sit, fetch and learn what its owner likes 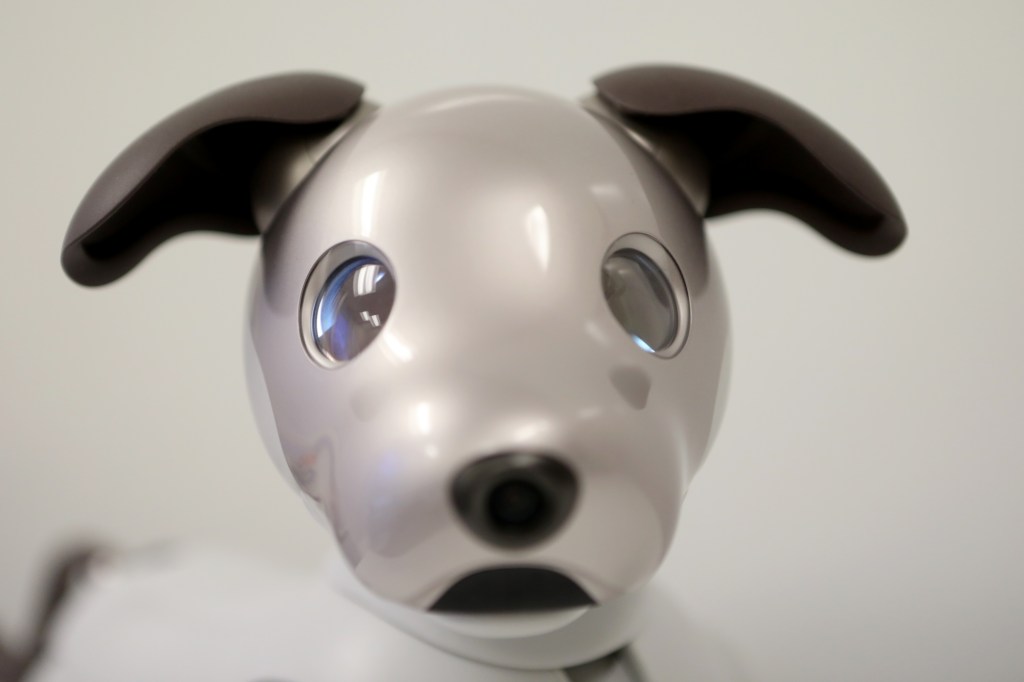 Click here if you are having trouble viewing the photo gallery or video on your mobile device.

Aibo, a $2,899 robotic dog from Sony, just might scamper its way onto some wish lists this holiday season.

Hoping to replicate the dog’s popularity in Japan — where the electronic pets have a rabid following — Sony is unleashing a limited-edition litter of aibo robotic dogs in the United States by the end of the year.

The aibo has OLEDs for eyes — like those used in Sony’s television displays — a camera in its nose and on its back, plus sensors on its back, head and chin that allow it to feel you petting it. It also has microphones, actuators and other technology that when combined with artificial intelligence allow the robotic companion to learn its owner’s behavior and react accordingly.

“AI makes the decision,” said Angel Vizcarra, senior marketing specialist for Sony and aibo’s favorite person in the newsroom conference room, where the demo took place this week. “He may say no” to some of the many commands its owner issues, Vizcarra said. For now, the dog can handle about 30 commands, including “sing,” “high five,” and “bang bang” — after which it rolls over and plays dead.

Some of the commands are customizable. For example, Vizcarra asked aibo to “learn,” then grabbed its paws and moved them back and forth a few times. Having learned the pattern, the dog then proceeded to repeat the same motions.

Sony has sold 20,000 of the dogs in Japan but isn’t saying how many will be available in the United States this year. The company is asking those interested to sign up on its website now to be alerted when pre-orders start this month. Delivery is expected by the holidays.

“Not that many people are going to buy a $3,000 robotic dog,” said Bob O’Donnell of Bay Area-based TECHnalysis Research. “But from what they’ve told me, it’s the beginning of more things to expect from them on the robotics side.”

For the hefty price tag, owners of the pup get the aibo — powered by a Qualcomm chip — that becomes one of a kind as you interact with it, plus an accessory bundle that includes a ball, a bone, paw pads and a dog tag. The aibo can “play” for about three hours before it can sense it needs to go to its bed, a.k.a. its battery charger, which is also included.

Each dog also comes with a three-year AI Cloud Plan, with AT&T providing the internet connection. The dog has to be connected to the cloud, hosted by Amazon, so it can work the way it’s meant to. The aibo uploads your interaction with it, and Sony’s artificial intelligence tech uses that information to teach it how to be your lovable pet.

The aibo can be pretty adorable. But it can take photos. Learn your face (as well as up to 100 others’ faces). Adapt to your smiles and other expressions. What about privacy?

“You’re always in control,” said Cheryl Goodman, head of corporate communications for Sony North America. She noted that photos aibo takes are stored in a mobile app, and are accessible only to the dog’s owners unless they choose to share them.

Goodman said aibo’s owners will want to keep giving Sony’s AI system fodder “in order to fulfill its purpose” of being an electronic companion that can evolve and react to human feedback. The aibo does not take video, but audio commands and owner preferences that will be sent to Sony will help form the dog’s personality.

“The integration of AI into consumer robotics was the hot topic of CES 2018, hardly an hour passed without another announcement by companies about a new consumer-facing service or device that was AI-enabled,” said Keith Strier, Americas Advisory AI leader for EY (Ernst & Young). “Sony’s experience with aibo should be a valuable tactical advantage.”

Sony first introduced aibo — Goodman calls the dog a “mascot” of the AI and robotics work the company is doing, which includes a partnership with Carnegie Mellon — to consumers in 1999 and discontinued it in 2006. The company re-introduced the sixth generation of the robotic dog in Japan last November, and showed it off at the Consumer Electronics Show in Las Vegas in January.

In Japan, a Buddhist temple has been the site of funerals for some of the previous versions of aibo that Sony no longer supports and repairs. It’s only fitting. Besides being short for AI bot, the word “aibo” means pal in Japanese, and pals deserve nice send-offs.

As for this most technologically advanced version of aibo to date, it has its cheeky side. When Vizcarra barked out the same command over and over to the robotic dog, aibo proceeded to lift its leg and make a peeing sound to make its displeasure known.

Vizcarra swatted aibo on its behind. “Bad dog,” he said. But there was no cleanup needed.