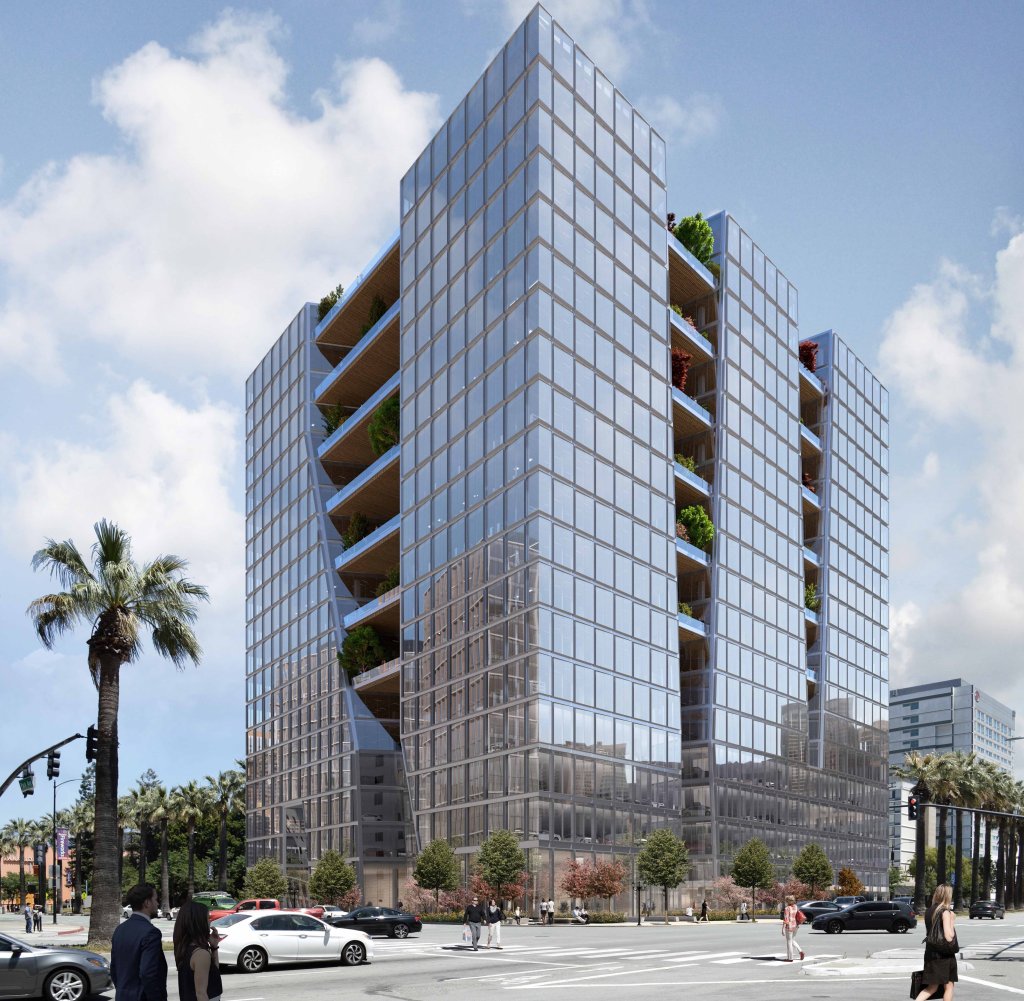 The tower would be 19 stories high, contain 875,000 square feet of space, and be constructed at the corner of Park Avenue and South Almaden Boulevard in downtown San Jose.

“We are very excited to be a part of the evolution of downtown San Jose into a vibrant, transit-oriented, world-class destination,” said Jay Paul, chief executive officer and founder of the development firm that bears his name.

A formal groundbreaking has been scheduled for sometime in November, the developer said. Jay Paul Co. received final approval earlier this month for the project.

“I’m really excited about this project having a groundbreaking so soon,” said Scott Knies, executive director of the San Jose Downtown Association. “November is earlier than I expected. I’m delighted that it’s getting underway now.”

The new office tower is slated to be completed in 2023, according to the company.

“The Jay Paul project at 200 Park Ave. is the domino that San Jose needed to get office development and jobs rolling into the traditional downtown core,” said Bob Staedler, principal executive with Silicon Valley Synergy, a land-use consultancy.

Among the distinct features of the striking office tower: a series of terraces and bridges that will provide natural lighting on every floor, outdoor gathering areas, as well as views of the nearby city of San Jose and the mountains that flank it.

The Jay Paul development is deemed to be a crucial new evolution for downtown San Jose.

Adobe, a fast-growing cloud services titan, is busy constructing a new office tower that would dramatically expand the size of the tech company’s headquarters campus that currently consists of three buildings in downtown San Jose. Adobe’s fourth tower would accommodate thousands of employees.

The difference between the Adobe project and the Jay Paul Co. endeavor is the developer’s project is being built on a speculative basis.

“There is a demand for more office space in downtown San Jose,” Knies said. “Tech companies like Zoom, Cohesity, Intacct, others, as well as business services companies and law firms.”

Downtown San Jose has suffered fitful starts and multiple setbacks in the quest to create a viable urban core for the Bay Area’s largest city.

This time around some differences have emerged that could nurture a successful blossoming for downtown San Jose.

Along with the Adobe tower and ventures being launched or studied by veteran developers Jay Paul, Sobrato Organization, and Boston Properties, search behemoth Google has formally submitted its preliminary proposals for a vast redevelopment of the currently sleepy western edges of downtown San Jose.

“This time around we are seeing some residential, some hotel interest, the rehabilitation of older historic buildings, the Adobe tower, Google, and now spec offices from Jay Paul and Boston Properties,” Knies said.

The new Jay Paul tower at 200 Park would likely be most suited to accommodate one or two major tenants.

A Newmark Knight Frank leasing team led by Phil Mahoney, an executive vice chairman, has begun to scout for tenants for the tower.

Gensler, whose projects include the Facebook headquarters in Menlo Park and Shanghai Tower in China, is the architect. Level 10, which built the Frank Gehry Facebook campus in Menlo Park, is the construction company. James Corner Field Operations, which designed the iconic High Line project in Manhattan, Navy Pier in Chicago, and Domino Park in Brooklyn, is designing numerous public and private spaces for the tower.

The project will include 26,000 square feet of outdoor terraces, Jay Paul Co. said.

“As with every important project we undertake, our focus will be on delivering quality and sustainability to 200 Park while we work to foster lasting relationships with our tenants, community, and the city of San Jose,” Paul said.