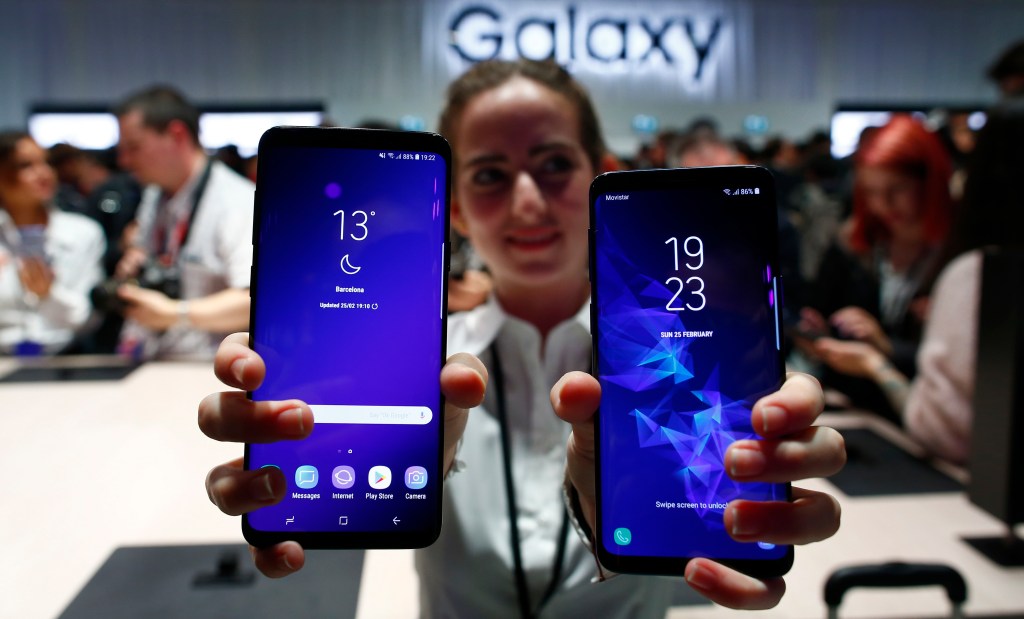 For the past week I’ve been using the Samsung Galaxy S9+, which goes on sale Friday. AT&T loaned me a unit to review.

Physically, it looks a lot like its predecessor with its 6.2-inch Gorilla glass screen. But oh what a screen. The 2960 x 1440 pixel Super AMOLED display is gorgeous. Colors pop in ways that I haven’t seen before. Text is crisper and easier to read. Like some previous Galaxy models — the screen wraps around the phone’s body. With the exception of a tiny bezel on the top and bottom, the front of the phone is all screen that even extends to a small slice of the phone’s sides.

At its announcement at the Mobile World Congress in Barcelona a couple of weeks ago, Samsung made a big deal that the phone’s camera can capture images in low-light.

Based on my tests, it delivers by switching to a fast f/1.5 aperture when it needs to maximize light. In daylight, the phone switches to its f/2.4 aperture to increase sharpness. I used a darkened windowless bathroom as a testing lab by taking a picture of the sink with the Galaxy S9+ as well as the Google Pixel 2, which also has a highly rated camera.

The difference, though not dramatic, is noticeable.  The Samsung camera got a 99 from DxOMark, a camera testing lab. That’s the highest mark yet for a phone camera, beating out the Pixel 2 by one point.

The camera also supports “fun features” and other gimmicks, such as super slow-motion that works with any moving object captured by the phone’s video camera.

The phone also lets you create an “AR Emoji,” which is a cartoon image of yourself, similar to Apple’s Animoji, introduced with the latest iPhone. Before I tried it, I put this in the gimmick category, but after playing with it, I’ve upgraded it to a fun feature. I love my emoji cartoon, which is a younger and fitter looking version of myself. You can also express your emotions with animated emoji stickers.

Another big plus for the Galaxy S9 is that it retains the standard 3.5 mm headphone jack, which means that you don’t need a wireless Bluetooth headphone or an adapter to listen to music. Apple famously abandoned the headphone jack as have some other phone makers, including Google, which left it out of its newest Pixel 2.

Thankfully, Samsung is finally using a USB C charging port, which is slowly becoming the new standard instead of the microUSB. USB C allow for faster data, more power and are easier to insert. Like Apple’s Lightning jack in newer iPhones, there is no wrong way to insert the plug into the phone.

The phone also has surprisingly good and loud stereo speakers. Normally I cringe when I hear loud music on a phone’s speaker, but these are quite acceptable.

The phone has a Qualcomm Snapdragon 845 2.8 GHz processor, which is the fastest as far as smartphones go. That may not matter to folks whose phones are already fast enough, but when comparing it with my Pixel 2, I did notice apps loading, and in some cases running, slightly faster.

Like many newer smartphones, Samsung lets you unlock the S9 with your fingerprint and has now moved the fingerprint reader to a convenient spot just below the rear camera. It’s easy to reach and is quick and accurate. The S9 also has an iris scanner which I find problematic. Unlike the face-recognition feature in the iPhone X, it sometimes doesn’t work well with eye glasses or low light conditions. I quickly abandoned using it.

As an experienced Android user, I found the S9 to be easy enough to adapt to, but — as with all Samsung phones — it took me awhile to get used to the differences between Samsung’s implementation and the “pure Android” experience from Google Pixel phones.

Samsung has a very active software team and has distinguished its phones with unique features and user interfaces that make them very versatile but necessarily easier to use. Samsung gives users a lot of choices when it comes to the interface. For example, the navigation bar, by default, appears only if you swipe up from the bottom. But you can double tap a little round dot on the phone’s left side to make it remain in view.

Just like Apple’s Siri, Google Assistant, Amazon’s Alexa and Microsoft Cortana, Samsung has its own artificial intelligence and voice recognition system that it calls Bixby. One way to activate Bixby is by pressing a dedicated button. Although you can disable that button, you can’t reassign it to other features.

I wish I could re-assign it to activate Google Assistant, which I find to be the best of the various voice-activated AI systems. Having said that, Bixby is better for accessing Google maps while driving. Press the Bixby key and say where you want to drive, and it just brings up the map with the directions. You can change your destination the same way. Most Android phones make you touch the screen two or three times before the voice command turns into driving directions, which can be dangerous at 65 miles an hour.

Though less expensive than the $1,000+ iPhone X, the Galaxy S9 is not cheap. The unlocked S9+ that I tested costs $840 from Samsung and the smaller S9 sells for $720.  Surprisingly, it costs more if you buy it from a carrier, though I wouldn’t be surprised to see some discounts soon.

If you’re in the market for a high-end phone, be sure to consider the Galaxy S9 or S9+. But if you’re even reasonably happy with your existing phone, you might want to wait to see if next year’s flagship phone offers more compelling reasons to upgrade.