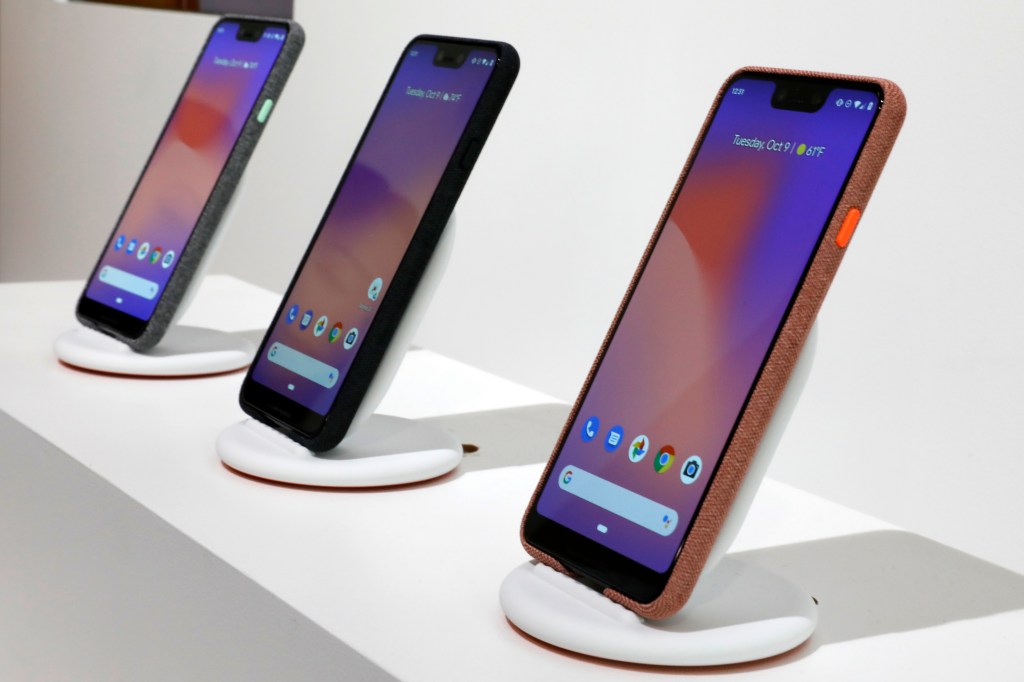 For the past week I’ve been testing Google’s new Pixel 3 XL phone, and I like what I see. Compared with last year’s model, I’m noticing a better quality screen and slightly larger display, somewhat better battery life and an improved camera and better speakers. Released on the heels of the new iPhone XS and XS Plus and Samsung’s Galaxy S9, the new Pixel 3 and Pixel 3 XL phones take their place as “flagship phones” that raise the bar.

Although some have complained about the notch at the top of the larger Pixel 3 XL (it’s not on the smaller Pixel 3), I find myself mostly ignoring it. Yes, it does take away a little screen real estate as does the bezel at the bottom of the screen, but there’s still plenty of room on the 6.3 inch, 2960 x 1440 pixel OLED screen to appreciate websites, ebooks, photos and videos. And, the screen is noticeably more vibrant than last year’s model with richer and truer colors. I’ve also been testing the new iPhone XS and XS Max phones and consider the Pixel screen to be every bit as good.

That notch, by the way, makes room for better quality stereo speakers and a wide angle selfie-camera. Even with the notch, there is room at the top for notifications that would have otherwise taken up screen real estate in the area below.

The front facing speakers are noticeably better. Google said that they’re 40 percent louder and that seems about right to me. While I still recommend using headphones or good external Bluetooth speakers, the phone’s speakers are relatively good quality.

Google has improved the overall build of the phone, including replacing the aluminum back on the Pixel 2 series with a higher quality glass back on the 3.  Frankly, I can barely tell the difference even when I slip the phones out of their cases but not at all when they’re in a case.

Which makes me wonder why people really care about a phone’s color and materials when most of us encase our phones to protect them from damage in the inevitable instance of a fall. Other reviewers have raved about the curves and overall premium feel which I also don’t notice or care about when it’s in a case. But if you care, the phones come in “just black,” “clearly white,” and “not pink.”

This may seem silly, but one hardware improvement I’ve noticed is that the power button is now light blue and seems to be easier to press than before. You still have to long press it to turn it off and restart so you won’t be doing that accidentally.

Less silly is that the Pixel 3s now have inductive “wireless” charging. Google sent me a $79 charging stand but you can use pretty much any Qi wireless phone charger. The Google charger also worked with my iPhone and my car’s charging stand works with both.

The Pixel 3 series has Gorilla glass 5, which is reasonably strong and scratch resistant but not as strong as the new iPhone XS and XS Max Gorilla Glass 6.

The Pixel 2 was known for its excellent camera and the Pixel 3 camera is even better.  The rear camera has a 12.2 megapixel sensor with an f/1.8 lens like the Pixel 2. But the front camera now includes a second wide angle lens which is handy if you take selfies with a group of people or want a lot of scenery in the background.

One big improvement to the Pixel 3 is updated software (not available on the Pixel 2 even with the latest version of Android) that improves its HDR+ technique of taking multiple pictures (it’s on by default in the 3) and merging them into one better quality image. Google has also added a menu in the photo app allowing you to pick from a wide panorama, portrait mode with blurred background and several other settings.

New is Photobooth, which waits for you to smile or make a funny face before snapping a selfie. Google now has “top shot,” which takes multiple frames and suggests the best one. It’s a bit of a gimmick but the new Playground feature puts characters like Marvel’s Iron Man in the picture of you or your subjects.

One thing I like about Pixel phones is that you can launch the camera app by double clicking on the power button. You can also use Google Assistant to say “take a picture,” “take a selfie” or “take a groupie,” for a wide-angle group picture.

Unlike the new iPhones, the Pixel 3 doesn’t come with a 2x optical zoom lens but Google does have software for what it calls “Super Res Zoom,” which actually does a better-than-expected job of applying a digital zoom. It also compensates for a shaky hand, which can be disastrous to any zoomed picture, even when using an optical zoom lens.

Google Lens now has two modes. Like before, you can use it to analyze a picture to try to recognize an object, copy any text in the picture or read a QR code. But now you can do this in real time, without having to snap a picture.

It seems like the idea of using a “phone” to make phone calls is pretty passé, but Google has one enhancement to its phone app. When a call comes in, you have the option to push “screen call.” The person calling will be asked to say why they’re calling and that answer will be transcribed on your phone in real time. You have the option to accept or hangup.

Both the 3 and 3XL use the new Snapdragon 845 processor, which makes it just a little faster than previous models. I’m not a gamer, but Google claims that the faster processor makes a difference in some games.

The smaller Pixel 3 has a 2915 mAh battery while the larger XL sports a 3430 mAh battery. I didn’t measure battery life, but I am able to get through a full day of normal usage.

Android Pie, which runs on all Pixel phones and is rolling out to other Android phones has digital well-being settings. This enables you to view a dashboard with a daily or hourly view of the time spent on your phone, how frequently you use different apps, and how many notifications you get.  You can also use it to reduce interruptions, set a bedtime schedule, which, among other things, turns the display to gray. Apple has launched a similar set of features on its latest version of iOS.

Should you buy it?

Unless your phone is two or more years old, you probably won’t notice a huge improvement. If you have an older phone, however, the Pixel 3 will delight you in many ways. I’m always reluctant to suggest anyone switch platforms so, if you’re an iPhone user, you probably want to stay with the iPhone and the same is true when it comes to switching in the other direction.  But here’s one thing I will say. The Google Pixels are the best Android phones on the market if only for the fact that they aren’t cluttered with unnecessary software and because Google offers excellent support, including techs you can speak with 24/7.