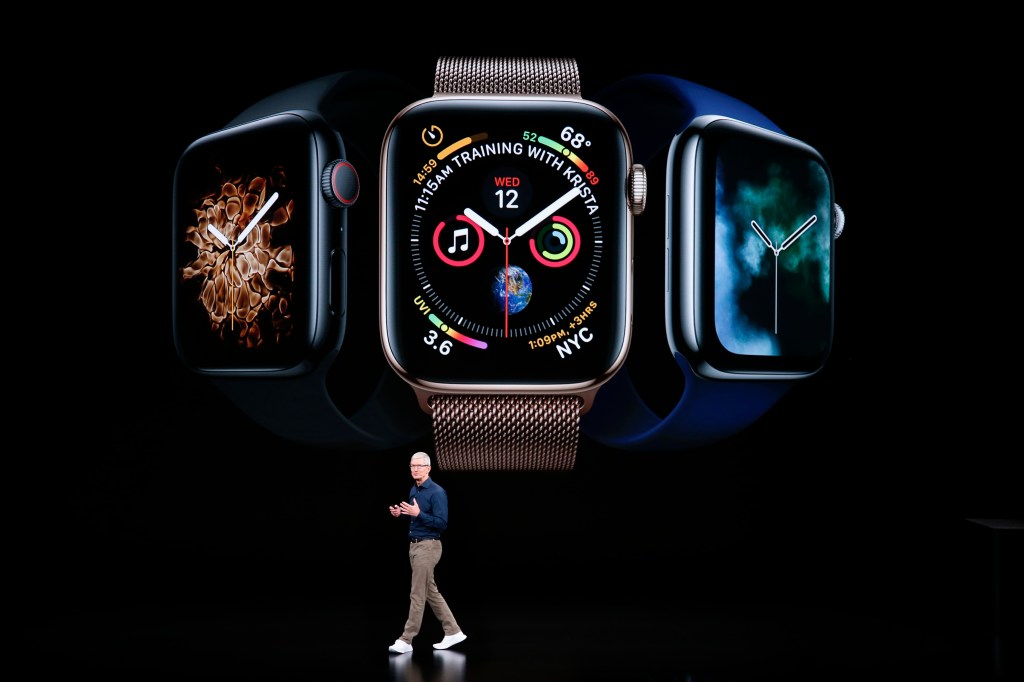 iPhones are great. But so are a lot of Android phones. I’ve owned iPhones in the past, but right now I’m using a Google Pixel 2 XL Android phone and I’m happy with it. Apple’s new iPhones, introduced Wednesday, are an improvement over their predecessors, but there isn’t enough there to tempt me into spending $1,100 for the 64 GB iPhone Xs Max or even $750 for the newest entry level iPhone Xr.  That is, if it weren’t for the improvements in the Apple Watch, which requires that you also have an iPhone.

What impresses me about the Apple Watch Series 4 isn’t the cool apps and watch faces or even how nice it looks on your wrist, but the fact that it can, literally, save lives. Apple has built-in a sensor that it says is “capable of generating an ECG similar to a single-lead electrocardiogram.”

The watch can also detect signs of atrial fibrillation, an irregular heart rhythm, and alert you if your heart is beating too fast or too slow.

The $499 (and up) Apple Watch Series 4 with all these heart-sensing features isn’t out yet, but earlier this year, Apple and Stanford Medicine launched the Apple Heart Study where volunteers agreed to send data from their Apple watches to Stanford to analyze potential irregular heart rhythms, a leading cause of stroke.

One of the people who joined the study was ZDNet senior technology editor Jason Perlow, who recently wrote an article for ZDNet called “How Apple Watch saved my life.” Perlow, like myself and many other tech journalists, wrote that he flips “between my iPhone and Androids pretty much seamlessly,” and that “I have never felt a sense of loyalty to the company, or appreciation in any sense.” But, he did buy a reconditioned 42mm Apple Watch Nike+ Series 2 to try out. He said he “wasn’t committed to it. I was also playing with the Samsung Gear and Android Wear as well. I felt they were about the same in levels of utility.”

But that was before he got some pretty important health news from his Apple Watch and the Stanford study, which informed him, “your heart rhythm appeared to vary more than expected during five different 60-second measurements taken by your Apple Watch.”

That led him to seek medical attention and a series of other tests to diagnose a condition he didn’t know he had. Perlow wrote that he was “extremely lucky the Apple Watch picked up the Afib relatively early.”

I remember when you needed a Mac to use an iPod but that changed at some point when Apple introduced software that made the iPod compatible with Windows. That led to an enormous growth in iPod sales. When the iPhone was launched, it worked with either Mac or Windows and now works independent of any computer. You don’t need a Mac or a Windows PC to use an iPhone.

I wish that were the case for the Apple Watch. I suspect that Apple could develop apps that make it compatible with Android phones and could — for the Apple Watch with built-in cellular connectivity — even make it work independent of any smartphone.

Of course, Apple isn’t the only company thinking about how to make products that can improve our health. Google is hot on the same trail as are all of the companies that make smartwatches and fitness bands. But there is a difference between fitness products and medical devices.

Even though the Apple Watch isn’t sold as a medical device, the heart functions have been approved by the Food and Drug Administration and the head of the American Heart Association was on-stage at the announcement, endorsing the potential life-saving features of the new Apple Watch.

Other companies are sure to offer similar technology and push the envelope even further. At CES this year, Omron showed off its Oscillometric Blood Pressure Watch, which is a smartwatch that can measure your blood pressure. I don’t know when the product will go on the market. Last I heard it had been submitted for FDA approval.

There are rumors that Apple has been testing a blood sugar monitor for the Apple Watch that won’t require breaking the skin. If it ever comes to market it could be great for people with diabetes or people who are concerned that their blood sugar may be inching up.

What’s amazing about all these devices is that they can bring medical-grade health evaluations to people in-between office visits, enabling many — like Jason Perlow — to identify problems that may not even show up during routine exams. It can also bring diagnostics to communities and individuals around the world that don’t have access to medical care either because it’s not locally available or not affordable. To me, that’s a lot more exciting than a shiny new iPhone.

Larry Magid is CEO of ConnectSafely, a nonprofit internet safety organization that receives support from Google and some of its competitors, including Microsoft, Twitter and Facebook.

Magid: Soon, you could cash in on your Tesla as a self-driving cab