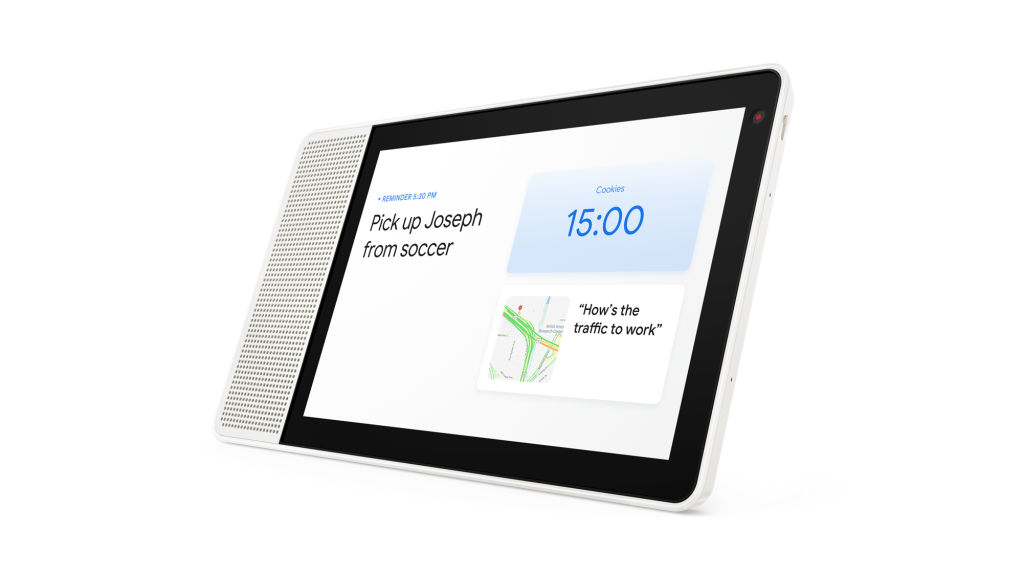 My wife, Patti, is pretty ho-hum about most of the products I review. But when I put Lenovo’s new Smart Display in the kitchen, she loved it, especially after I showed her how easy it is to display recipes, schedules, maps, detailed weather reports and even videos on YouTube and various news outlets. There’s a model with an 8-inch screen for $199.99 and one with a 10-inch screen for $249.99.

The Smart Display is to Google Home speakers what Amazon’s Echo Show is to its Echo speakers. Like their screenless siblings, these are personal home assistants designed to recognize your voice and answer questions, play music and perform other tasks. The answers to questions are pretty much the same as with the Google speakers, except the information is also displayed, sometimes with more detail.

For example, when you ask a Google (or Amazon Echo) speaker about the weather, it will give you the current temperature, whether it’s sunny or cloudy and the high and low temperatures for the day.

When you ask the same question of the Smart Display, it also shows how the temperature will change throughout the day as well as links for what’s in store for the days ahead.

If you ask “where’s a nearby grocery store” on the speaker, you’ll sit through a long recitation of all the nearby stores. If you ask the same question of the Smart Display, you’ll hear about the closest store but be able to scroll through a visual depiction of all nearby stores, complete with pictures, hours of operation and star ratings. Touch the one you want and you’ll get the address and directions.

We put the display in the kitchen for several reasons. First, that’s where we spend a lot of time so it’s a logical place to listen to music, catch up on news and get answers to all sorts of questions.

It’s also great to be able to bring up recipes that you can read. Google and Amazon speakers will recite recipes, but it’s easier to follow on-screen directions and much easier to select which recipe you want.

I asked for a barbecue chicken recipe and got 10 options, some of which displayed number of ingredients, calories and preparation time even before I clicked on the one I wanted. You also can use the display to add to or view a shopping list that is also available on your phone.

Like the Amazon Echo and Google speakers, you can ask the display questions like “who was George Washington” and hear the first paragraph or two from the Wikipedia entry. The Display, however, provides additional detail and images. It showed me Lincoln’s height and date of assassination. For Theodore Roosevelt, I got a picture of him by a horse, his term in office and date and place of death. A verbal search for Donald Trump shows his picture, his height, and for some reason, Wikipedia’s estimate of his net worth.

You can also search for images. I asked to see a picture of the state capitol of Colorado and got stock images, but when I asked for a picture of the California capitol, Google displayed one from a personal photo library with Patti in the foreground, based on its pattern matching technology. I asked for pictures from New York and got a slide-show from pictures I’ve taken on my various trips.

As you’d expect from a Google-powered screen, the display can show YouTube videos. I asked it to show videos on how to unclog a sink, and thumbnails from several came up. I said “play the second one” and it started.

What I don’t understand is why Google Home devices don’t show or recite Google search results. Wikipedia is of course limited to mostly prominent people and things that are on the site. But Google has far more information.

For example, if you ask for the biography of someone who is famous, it will almost certainly be on Wikipedia, but Google has listings for lots of people who aren’t well-known and who aren’t in Wikipedia.

Like the speakers, the Smart Display works with many home-control devices. I have a system in my house which allows me to lock doors, adjust thermostats and control lights and appliances through an app or via voice using Echo or Google Home. But the display gives me a visual confirmation. If I set my porch light brightness to 20 percent, it tells me and shows me the setting.

My most common use for both my Echo and Google Home speakers (I’ve bought a few of each) is listening to music, and the smart display does that very well thanks to its built-in 10-watt speaker with passive tweeters. In addition to music, you also see the album covers. I have my speakers and displays linked to my Spotify account, but you can also use them with Pandora, YouTube and Google Play Music or any music app on your phone or tablet.

Many of these same tasks can be accomplished on a smartphone or a tablet, but it’s nice to have a device set-up and always ready to respond to your voice. In many ways, this is the imbedded computer that people have been talking about for years — a device that you just interact with when the mood strikes you. It’s not perfect, but it’s taking us in the right direction.

Larry Magid is CEO of ConnectSafely, a nonprofit internet safety organization that receives support from Google.