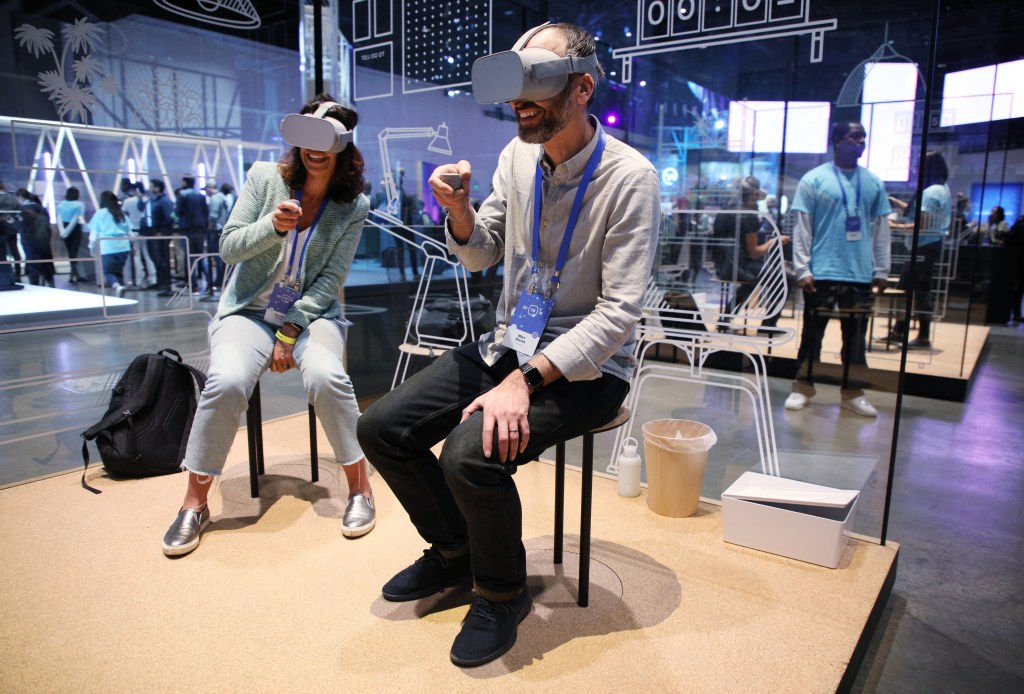 Did you ever experience the Circle Vision 360 theater at Disneyland? As a child, I marveled at the America the Beautiful experience where I stood in the middle of a room surrounded by nine screens and enjoyed a 360-degree tour of America. Well, that’s nothing compared with what you can do with a virtual reality headset that allows you to look all around as you fly, drive, walk or just sit and watch — all while never moving more than a foot or two from where you started.

One common experience is to tour a building and look at the walls, floors and ceiling. Another is to enjoy a bird’s eye view as you fly over a city. One of the scariest experiences in VR is to stand on the top of a virtual building and look over the side. It’s easy to forget that you’re not actually risking your life. VR is ideal for immersive gaming.

Until now, if you wanted to experience virtual reality, the headsets on the market would only work if connected to a smartphone or a PC.  Now there are two standalone VR headsets, the $399 Mirage Solo with Daydream from Lenovo and the $199 Oculus Go from Oculus, a division of Facebook. Both Lenovo and Oculus provided me with units to test. Lenovo also loaned me its new $300 camera that lets you take your own 180 degree VR pictures and videos.

If VR is ever to go from niche to mainstream, moderately priced standalone headsets will make it happen. Until now, your options were to spend $600 or more on a headset that you had to tether to a high-end PC or get a product like Samsung Gear VR or Google Daydream that required you to insert a smartphone.

Having a standalone VR system makes a lot more sense. Once it’s configured, it’s easier to use. For the Oculus and Lenovo units, you simply connect to WiFi. Once a VR program is loaded into the headset, you even can use them when you’re not online.

The Lenovo Mirage and Oculus Go are both slightly uncomfortable, but that’s true with all VR headsets. In both cases, images and videos can sometimes be grainy and slightly out of focus. You adjust the focus by repositioning the headset by tightening or loosening on your head. Neither has a dedicated focus controller, but with a little practice, both allow you to get pretty good resolution. The Lenovo Mirage, at 23 ounces, is considerably heavier than the 17-ounce Oculus Go. In both cases, you don’t need your phone each time you use the headset, but you do need one to set it up.

Because it’s $200 cheaper, I suspect the Oculus Go will do better than the Lenovo Mirage. Still, there are things Lenovo buyers get for that extra money including a newer version of the Snapdragon processor, 64 GB vs. 32 GB storage on the base model (an extra $50 buys you 64 GB storage on the Oculus Go) and sensors that track your motion so you don’t bump into something or fall down a staircase.

It also knows the position of your head relative to what you’re experiencing, so if you lean toward an object, it will appear closer. Lean back, and it appears farther away.

The Lenovo is better built. You can adjust the fit by tightening a large knob at the back. You loosen or tighten the fit on the Oculus Go with Velcro straps.

Both headsets have a standard headphone jack for audio, but the Oculus Go has small built-in speakers. Lenovo’s product comes with earbuds, which are required to hear audio. Both devices come with a handheld controller.

They also both allow you to stream video, such as Netflix, Hulu and YouTube. In theory, streaming through a VR headset gives you a theater-like experience because the screen appears to be enormous – like a movie theater.  Having said that, it sometimes also looks grainy, and even if it’s not grainy, it’s a bit uncomfortable.

Both these devices are a good introduction to the world of VR, but that begs the question of whether you really want to own a VR headset. It’s something you should experience at least once, but, so far, I haven’t come across anything compelling enough to keep me coming back. People who love immersive video games would enjoy it more than I do, and I can certainly see how VR can enhance education.

Personally, I’m more excited about Augmented Reality where, instead of glasses that take over your entire field of vision, you’re looking through translucent glasses that superimpose computer images over the real world. And I’m kind of fond of the real world all by itself.

People are more honest on Tinder than you may think, study says

People are more honest on Tinder than you may think, study says