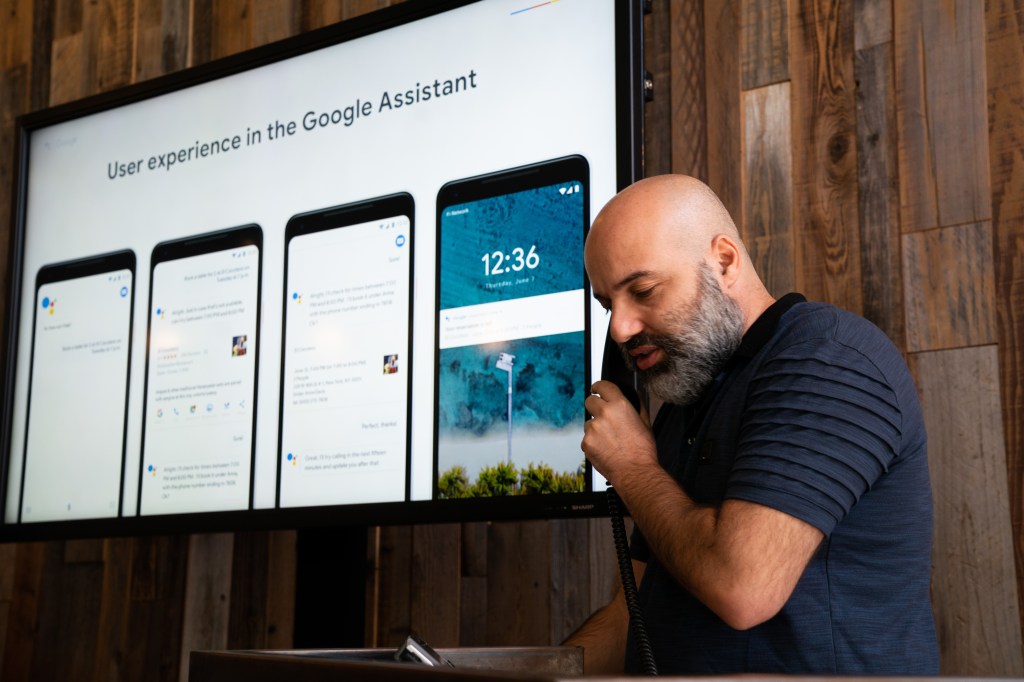 MOUNTAIN VIEW — After generating buzz and controversy with its unveiling, Google’s human-like speaking assistant Duplex will be released to select users and businesses this summer, the company announced this week.

Google Duplex was introduced in May at the online search giant’s I/O developers’ conference in Mountain View. It was advertised as a tool for users to book restaurants and hair salons over the phone with the Assistant program making the call. Following the conference, ethics and legal issues surrounding the AI program were debated, such as whether Google can record the phone conversations and how Google should disclose to the businesses that they are speaking to a bot.

In an Israeli hummus shop in Mountain View on Tuesday, Google executives announced at a media event that a limited, undisclosed number of users and businesses outside of Google will test out Duplex. In the next few weeks, the users and businesses will use Duplex to collect information on upcoming holiday hours. Then, later this summer, Google Duplex will be tested in booking restaurant reservations and hair salon appointments.

After this summer, however, it is unclear how or whether Google will scale up its Duplex technology, according to Nick Fox, Google Assistant vice president of product and design. Fox and Google Assistant Vice President of Engineering Scott Huffman demonstrated the product Tuesday and answered media questions.

“The reason we are being slow and deliberate about this is that it’s critical we need to get the experiences for users and businesses right,” said Fox. “This really is about providing value.”

Oren Dobronsky, owner of Oren’s Hummus Shop where the Duplex demonstration was held, said Duplex will greatly help small businesses. Sixty percent of small businesses that take reservations do not have an online booking system to sign up, according to a Google customer survey in April.

“For businesses like ours that do not have online reservation systems, this is a very big deal,” said Dobronsky.

Duplex has added some new disclosures in the beginning of the phone calls it makes to book reservations. Whereas in the I/O presentation, when Duplex jumped right into booking a dinner reservation, the Duplex now generally starts with this introduction:

Fox said that the presentation was intended to clarify that Google intends to uphold transparency with Duplex and similar AI programs.

“I think at I/O we told part of a story,” said Fox. “It was a technical demonstration. We talked (among ourselves) about how transparency is important to us, but we didn’t show how it will be implemented.”

Duplex comes with strict limitations on what it can answer and what it can’t, according to its demonstrations. Duplex will only be able to answer what the user told the Assistant, such as the number of guests, time and date for the reservation, and the name of the user. The program will not be able to answer irrelevant questions to the booking and will not be able to disclose user information, such as the user’s email address, without the user’s permission.

Google admitted that Duplex sometimes can get confused and won’t be able to continue the phone conversation. In such cases, Google Duplex will transfer the call to a human operator.

In a live demonstration with this news organization, the Duplex fared well with standard questions in booking a table for two on July 2. But when a reporter pivoted at the end and told Duplex that July 2, in fact, was all booked out and asked if the party of two can come in the next day, Duplex expressed confusion and difficulty understanding the change and quickly transferred to a human operator.

Huffman said the shortcomings in the demonstrations show that the Duplex currently is not at a stage where it can hold a general conversation with a human.

“When we first announced this, a lot of the questions we got, and concerns we received, seemed to come from a belief that maybe Google is creating a general AI where the program can make a phone call to a person and hold a conversation,” said Huffman. “I want to clarify that we are very, very, very far from that.”